Parrish leaves MNGOP and will not return. 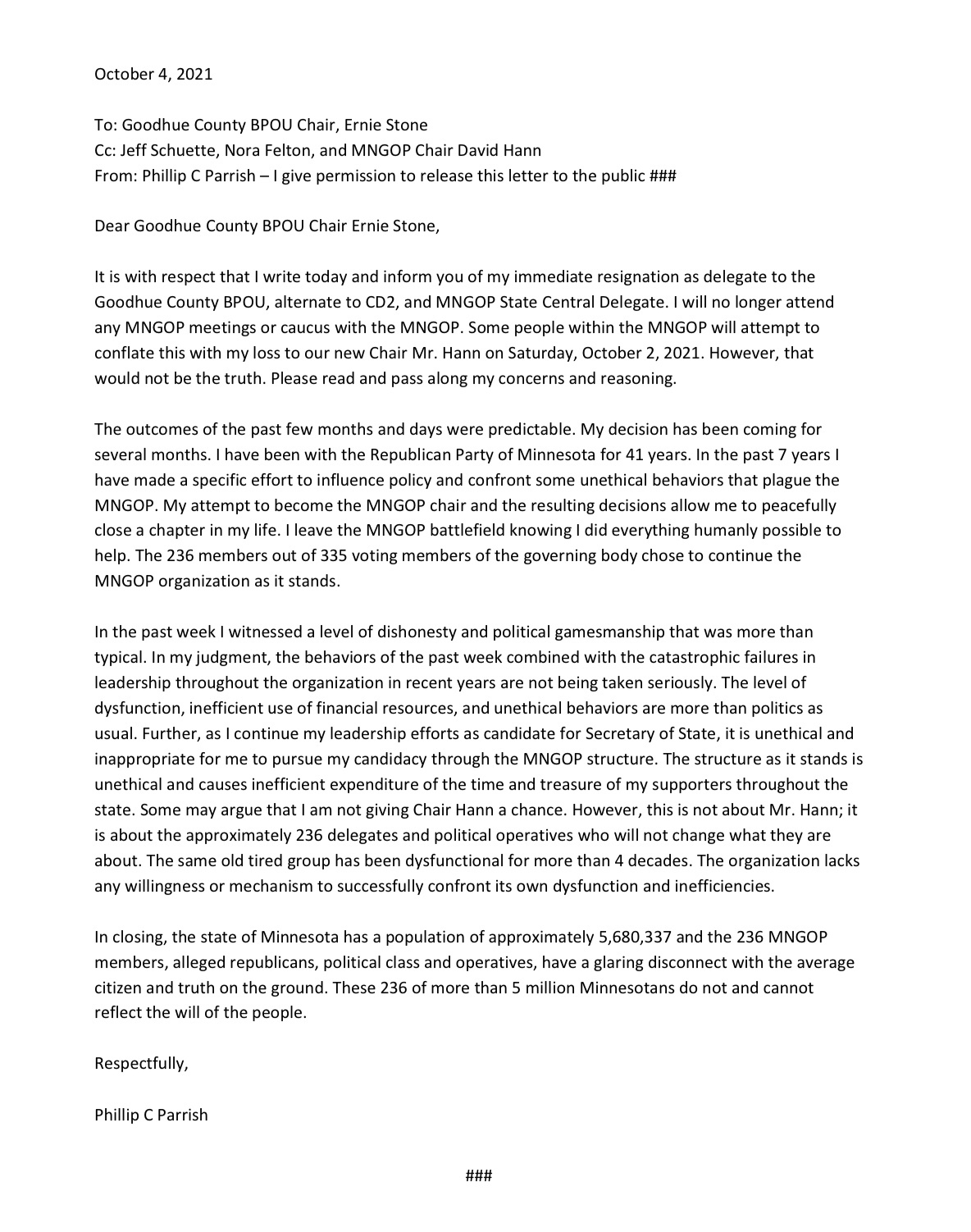 It is with respect that I write today and inform you of my immediate resignation as delegate to the Goodhue County BPOU, alternate to CD2, and MNGOP State Central Delegate. I will no longer attend any MNGOP meetings or caucus with the MNGOP. Some people within the MNGOP will attempt to conflate this with my loss to our new Chair Mr. Hann on Saturday, October 2, 2021. However, that would not be the truth. Please read and pass along my concerns and reasoning.

The outcomes of the past few months and days were predictable. My decision has been coming for several months. I have been with the Republican Party of Minnesota for 41 years. In the past 7 years I have made a specific effort to influence policy and confront some unethical behaviors that plague the MNGOP. My attempt to become the MNGOP chair and the resulting decisions allow me to peacefully close a chapter in my life. I leave the MNGOP battlefield knowing I did everything humanly possible to help. The 236 members out of 335 voting members of the governing body chose to continue the MNGOP organization as it stands.

In the past week I witnessed a level of dishonesty and political gamesmanship that was more than typical. In my judgment, the behaviors of the past week combined with the catastrophic failures in leadership throughout the organization in recent years are not being taken seriously. The level of dysfunction, inefficient use of financial resources, and unethical behaviors are more than politics as usual. Further, as I continue my leadership efforts as candidate for Secretary of State, it is unethical and inappropriate for me to pursue my candidacy through the MNGOP structure. The structure as it stands is unethical and causes inefficient expenditure of the time and treasure of my supporters throughout the state. Some may argue that I am not giving Chair Hann a chance. However, this is not about Mr. Hann; it is about the approximately 236 delegates and political operatives who will not change what they are about. The same old tired group has been dysfunctional for more than 4 decades. The organization lacks any willingness or mechanism to successfully confront its own dysfunction and inefficiencies.

In closing, the state of Minnesota has a population of approximately 5,680,337 and the 236 MNGOP members, alleged republicans, political class and operatives, have a glaring disconnect with the average citizen and truth on the ground. These 236 of more than 5 million Minnesotans do not and cannot reflect the will of the people.

Minnesota August 9th Primary – State Representative District 27B – Do You Know Who You Are Voting For?

Minnesota U.S. Representative District 5 (aka CD5) – Do You Know Who You Are Voting For?

Minnesota August 9th Primary – State Representative District 27B – Do You Know Who You Are Voting For?

Minnesota U.S. Representative District 5 (aka CD5) – Do You Know Who You Are Voting For?

Minnesota August 9th Primary – State Auditor Candidates – Do You Know Who You Are Voting For?